Today, I'd like to review a Slot machine based on one of the most successful movies by Steven Spielberg: the Goonies.

Released only last year (2018) by Blueprint Gaming, the Goonies Slot machine has 20 paylines, five reels, three lines, and an RTP of 96 percent.

While the Goonies had to wait for 33 years to be adapted into a Slot, the wait was worth it.

Because Blueprint delivered something that will amaze every gambler who knows a thing or two about online Slots.

The second you launch the Slot, you are greeted with a fun excerpt of the movie's soundtrack and the sudden appearance of a few wacky characters (like Chunk).

If you've never seen the movie, it might come off as a bit overwhelming.

Yet, think twice before you close the Goonies Slot in favor of a more grounded game like Starburst.

The base game of the Goonies is not as annoying as its intro, and it actually offers something most other Slots don't.

If you'd like to know what it is - just scroll down to the Bonus Section.

How to Play the Goonies Slot

Here's what I really like about the Goonies Slot machine: it lets you make a super small wagers that go as low as 10 cents per bet.

Of course, those who prefer the high risk - high reward type of gaming can make much higher bets. In fact, you can wager up to €200 per spin (which I don't suggest, unless you're a millionaire).

So, to play the Goonies video Slot, you simply have to decide on how much you want to spend, and follow these steps:

The Payouts of the Goonies Slot Machine

While playing the Goonies Slot game, you'll encounter many different symbols on the reels.

Most of them are images you'll recognize from the movie, including treasure chests and various skulls.

Now, about the payouts.

The letter symbols can only give you rather humble rewards that go from four to 100 coins per win.

However, the symbols that depict movie scenes are much more valuable, giving you up to 500 coins per spin.

It's not an exaggeration that the Goonies Slot machine is one of the most bonus-packed video Slots the world has ever seen. 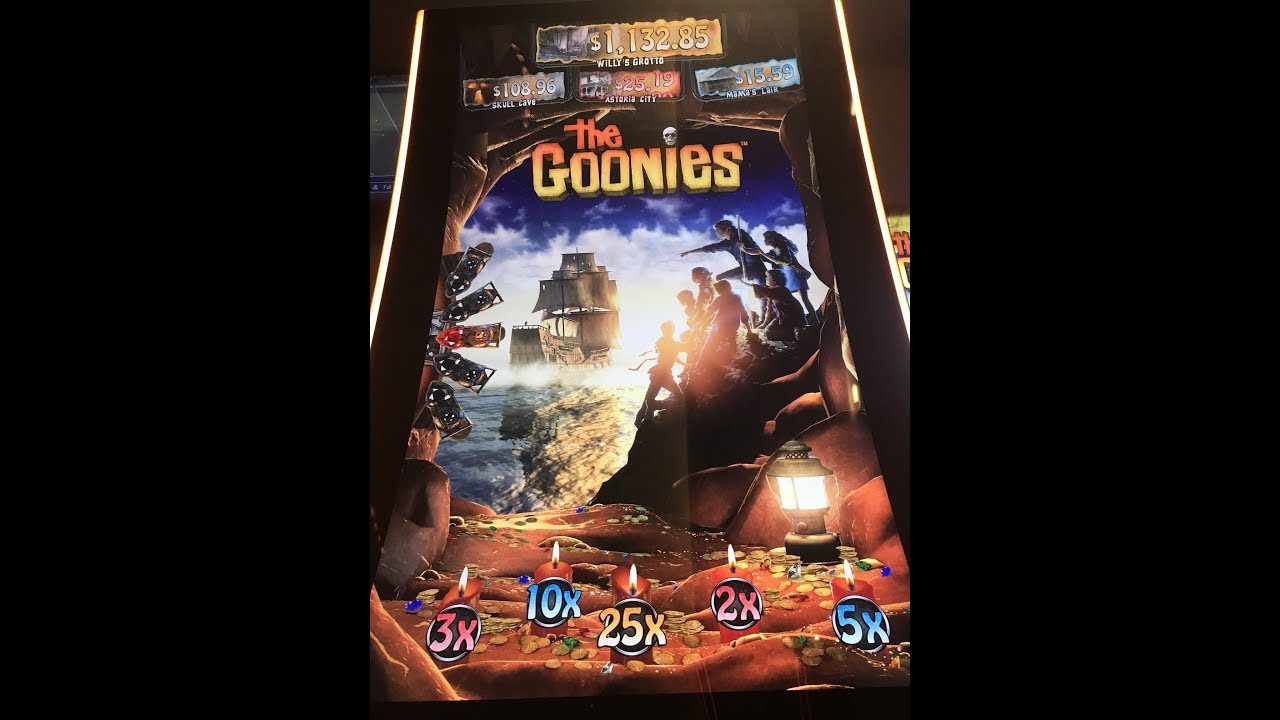 But what if I told you that..there's more.

Get three or more Scatters and the game will activate its special One Eyed Willy's Bonus.

You'll surely notice when it happens, as the reels will disappear, giving way to a pirate ship's wheel - which you'll spin to get one of the six bonuses the developers so generously prepared for you.

Here, I listed the features by how lucrative they are, which means that One-Eyed Willy's Treasure is the best one to trigger:

However, things are not over once you reveal your bonus feature.

Because then, you have two possibilities: you can either take the bonus and move on, or..try to gamble your bonus in order to upgrade it.

If you choose to gamble, another wheel will appear, containing better bonuses and some mystery wedges.

And in case you land on one of the mystery wedges, you get a random cash prize, which might not be as lucrative as a bonus - but it's still a good catch.

As a Slot enthusiast, I can only praise the Goonies Slot machine for its bold decisions in regard to bonus features.

The broad betting options also get a huge plus from me, as I appreciate games that not only let me bet as little as possible, but also allow high-rollers have a little fun too.

All in all, it's one of the best Slots to play for free and for real money. Real indigenous dream catchers. At least once.

The promotion presented on this page was available at the time of writing. With some Casino promotions changing on daily basis, we suggest you to check on the site if it still available. Also, please do not forget to read the terms and conditions in full before you accept a bonus.